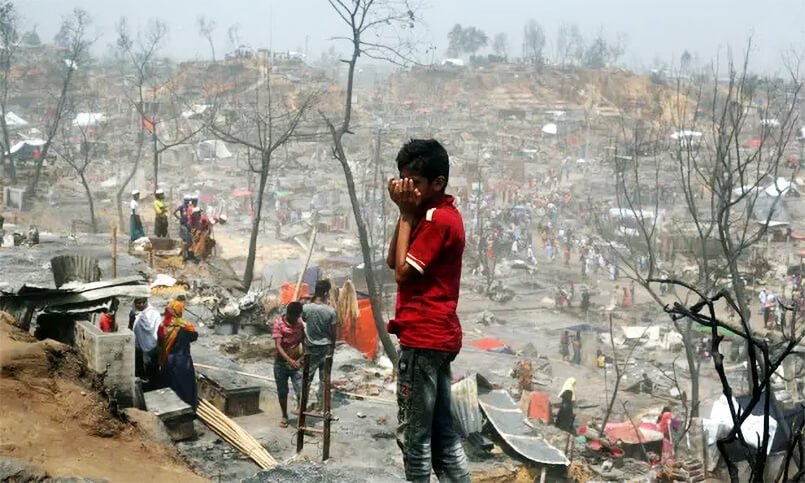 In 1977, the Myanmar military launched a national drive to register citizens and drive out people they deemed to be “foreigners”. Since then, more than 2.5 million Rohingya people have fled the country, with 740,000 fleeing to Bangladesh in the displacement crisis of 2017 alone. It is nearly a decade since the Myanmar regime and its supporters were first denounced by the international community for carrying out a “campaign of ethnic cleansing” against the Rohingya people.

Legal initiatives on behalf of Rohingya survivors issued this week allege that the campaign of clearances and genocide perpetrated on the Rohingya people was facilitated by a Goliath, Facebook. “Facebook turned away while a genocide was being perpetrated,” claims Tun Khin, the president of the Burmese Rohingya Organisation UK. “Putting profit before the human rights of the Rohingya people, permitting the spread of hateful anti-Rohingya propaganda which directly led to unspeakable violence.”

Facebook’s algorithm promoted hateful and divisive content: it handed the Myanmar military and its extremist supporters the perfect tool for distributing and amplifying hate speech and for inciting violence

We believe Facebook is guilty of many things. Facebook was greedy: it sought to monopolise the Myanmar market by providing access to its platform without incurring data charges. This meant that, for many in Myanmar, Facebook was the internet. The design of Facebook’s algorithm promoted hateful and divisive content: it handed the Myanmar military and its extremist supporters the perfect tool for distributing and amplifying hate speech and for inciting violence against the Rohingya people.

We believe Facebook was negligent: it failed in its policy and in its practice to invest sufficiently in content moderators who spoke Burmese or Rohingya, or local fact-checkers with an understanding of the political situation in Myanmar. Moreover, it allowed vast numbers of posts inciting violence or containing hate speech to be published, and permitted many accounts that posted such material to stay online.

Finally, Facebook was callous: even after it was warned—as early as 2013—about the extensive anti-Rohingya content on its platform, it did not do anywhere near enough to intervene. Facebook executives admitted in 2018 that they knew the company needed to “do more”. That was three years ago, but it was only this week, after being notified about our legal actions, that Facebook announced it was closing further military regime accounts.

It is the same old story: corporate giants from the global north roaming with impunity in the global south for profit, to the detriment of those who are the most vulnerable in the world. The Rohingya people have no access to the courts in their native land while the Myanmar constitution forbids them from having any rights. Even if they did, what form of fair hearing would they have in the courts of a regime that is committing genocide against them?

Today, the majority of Rohingya survivors are dispersed across the globe and those that remain continue to face crimes against humanity. The Rohingya people have been displaced to Bangladesh, Pakistan, Malaysia, Saudi Arabia, the UAE, India, the US, Australia, Thailand and Europe. Stateless, without legal rights, they are some of the most vulnerable people in the world: following on from the primary act of genocide, they also face exposure to secondary vulnerabilities such as human trafficking, child labour and gender-based violence. To add insult to injury, the refugee camps endured a disastrous fire and Covid-19 complications.

While cultural, ethnic and religious tensions are at the heart of their persecution, the Rohingya people also had environmental injustices thrown at them. The mass “clearance operations” (as the military described them) conveniently cleared swathes of land for oil and gas development. Major international oil giants have planned production-sharing initiatives with the Myanmar regime within the Rakhine basin. The Rohingya people’s plight was sealed by the Shwe gas project, which was designed to supply gas from Rakhine state (the Rohingya homeland) to China’s Yunnan province and factories owned by the Myanmar government and military, and their associates. The project has destroyed local fishing and farming—the backbone of Rohingya society. Land was confiscated to provide clear areas for the pipeline and associated infrastructure. The pipeline has torn through the Arakan Yoma forest ecosystems, created soil erosion and destroyed vast amounts of coral reefs—destroying the cultural infrastructure of the Rohingya people. Nothing short of genocide and ecocide has been carried out against the Rohingya and their homeland.

It is now incumbent on the courts of the global north to provide access to justice for the vulnerable people of the global south. After all, it is within the jurisdictions of such established and hallowed courts that these errant Goliaths hide and are based. Such corporates repeatedly attempt to avoid accountability; indeed Facebook has so far only responded to letters alerting them to this litigation by claiming that the company cannot be held liable in the UK but only in Dublin, where it is provided greater legal protections. Corporate empires and tech businesses such as Facebook are purposely contrived to tap dance around corporate liability, but justice must eventually win out. A business model that is inherently global is inherently liable globally. It will be fitting for David to bring down Goliath after the mighty and powerful in government have failed so far to do so.