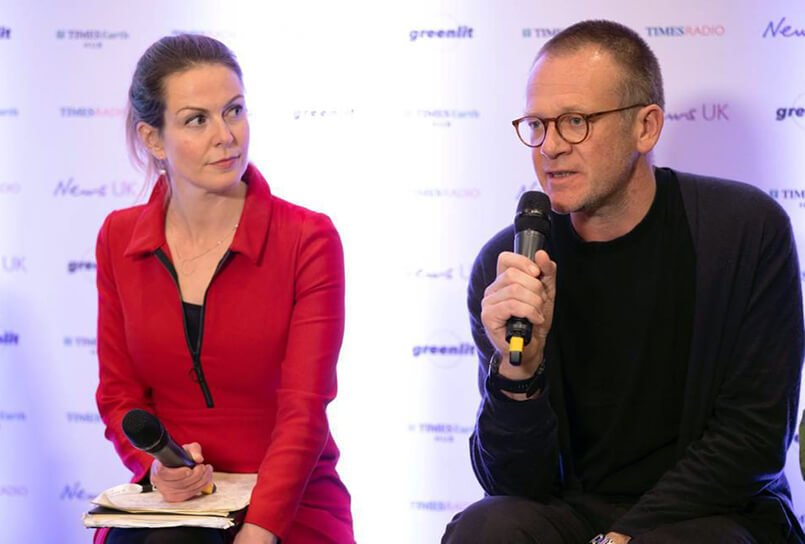 At the start of November, our team headed to Glasgow for the COP26 Summit, where Greenlit were the main sponsor for The Times Earth Hub.

A summary of the week:

On Monday, we had a great talk with President Mohamed Nasheed, former president of the Maldives and current speaker of the Maldives parliament, on the realities of climate change for his country and what leaders in the Global North need to do to protect the Maldives, as well as their own countries.

We then heard from our Senior Partner, Jason McCue and Amy Richards of Global Witness who discussed what actions are needed across the political and legal spheres in order to combat and mitigate the environmental injustices that continue to occur around the world. Jason McCue raised the prospect of passing a UN Security Council resolution to have all member states enact a law of ecocide which would give environmental protection equivalent force to existing human rights safeguards.

On Tuesday we had a great conversation with Claire Pool, CEO and founder of Sport Positive, Julia Fry from Extreme E and Tom Gribbin, CEO of Planet Super League, about the role sports can play in the fight against climate change. The discussion focused both on the role fans and athletes can drive change and it was fantastic to hear about how sport can be weaponised in this struggle.

We also heard from Philip Boulton of Greenlit, Thomas Tayler of AVIVA Responsible Investment and Anna-Marie Slot of Ashurst, about how financial capital can be deployed to address the climate crisis and the speakers shared their experiences and views on the differences between investments in the Global South and the Global North, including on the intersection and overlapping nature of each of the 3 elements of ESG.

On Wednesday, we had great insight into the UK’s energy matrix and the effect of the government’s investment (or lack thereof) in innovative renewable energy technologies from Dale Vince of Ecotricity and Emma Pinchbeck of Energy UK.

We also had a fascinating conversation with Professor Gail Whiteman, Professor of Sustainability and Head of the Arctic Basecamp Project who talked about the effect of the climate crisis on the Arctic, and what this could mean for the rest of the world. She also brought a bottle of melted glacier water with her; some of the 17 million litres of water that come from melting ice every second in the Arctic.

On Thursday we had the final evening of the Times Earth Hub which included a panel hosted by the Deep Sea Conservation Coalition with Mirella von Lindenfels, Sylvia Earle and Sian Owen discussing the need for the oceans to be front and centre of all our conversations (and actions) around climate change.

We then heard from Chris Stark of the Climate Change Committee and Amal-Lee Amin of the CDC about the need to ramp up government climate policies in the UK and internationally, and the role of investment in fighting the climate crisis.

Finally, we had a fascinating panel on human rights and governance; and the effects of both on climate change. Jason McCue (our Senior Partner and co-founder of Greenlit), Tessa Khan of Uplift, Seema Joshi of Global Witness and Alexander Rhodes of Mishcon de Reya spoke about the realities of climate enforced migration and the way the law can be used to drive change and ensure companies and governments act in a way that protects the environment and human rights.