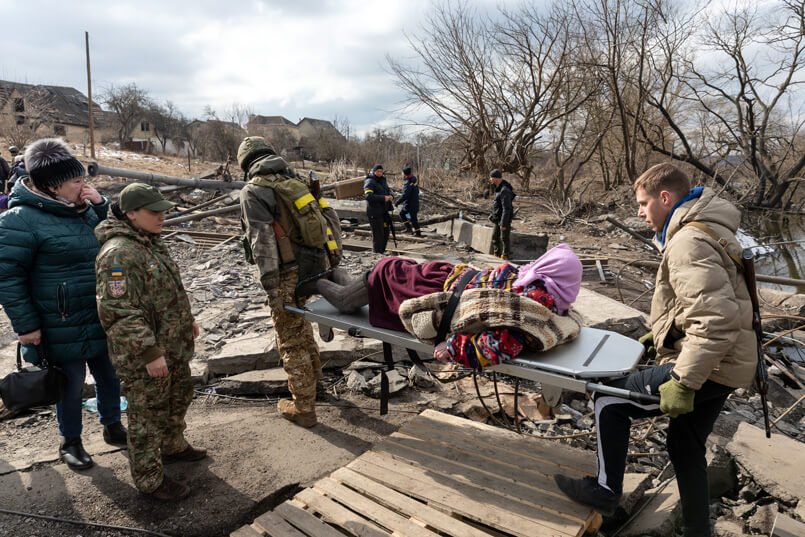 Posted at 16:00h in Press Release by McCue Jury & Partners

Today, Ukrainian victims of Russia’s illegal war announced civil proceedings in the High Court in London against the Russian private military company (PMC) Wagner Group (WG) and its founder, Yevgeny Prigozhin. The action is part of a broader civil society lawfare campaign being run by an international group of lawyers, investigators, and campaigners (further similar actions will be commenced shortly in the UK and US).

Earlier today, evidence was given by the victims’ solicitors, McCue Jury & Partners LLP, at the UK Parliamentary Foreign Affairs Committee Inquiry ‘Wagner Group and Beyond: Proxy Private Military Companies’. During the inquiry, the victims’ UK High Court action was announced at the same time as a letter before action (LBA) was served on Prigozhin both personally and on behalf of WG.

The action will allow ordinary, courageous Ukrainian citizens to pursue legal compensation claims against dominant actors within ‘Putin’s War Machine’, to frustrate its efforts and obtain damages for the atrocities being carried out in Ukraine.

The LBA accuses Prigozhin, WG, Putin and prominent individuals linked to his war machine of intentionally causing harm and suffering to the claimants as well as an unlawful means conspiracy to carry out an illegal war through terrorism. It alleges that the defendants purposely engaged in a campaign of terrorism that included the targeting of civilians as well as vital Ukrainian infrastructure and facilities, extrajudicial killing, attempted political assignations, the use of rape as a weapon of war, and the planting of explosives around nuclear facilities. Their purpose was to spread terror and chaos in Ukraine; thereby facilitating the illegal invasion by placing strain on infrastructure and creating an unmanageable state of emergency. This strategy sought to hasten the invasion in several ways: citizens fleeing from terrorism would minimise resistance and, at the same time, reduce civilian collateral damage, thereby lessening the risk of NATO engagement.

Whilst Putin and WG continue to carry out acts of terrorism in Ukraine, in commendable contrast, the Ukrainian victims bringing this legal action choose to use the rule of law and justice to fight back. To begin with, the claim is initially brought by a few brave individuals (who welcome fellow eligible Ukrainians to join them). But it also symbolically represents the interests of all Ukrainian nationals who have suffered loss as a result of the war, including the hundred thousand plus Ukrainians who evacuated to the UK. It is anticipated that the number of eligible claimants will increase significantly in the coming weeks.

Public support is needed through crowdfunding for this case and the civil society lawfare campaign to be able to onboard further victim claimants, identify further defendants involved with Putin’s war machine, and target billions of dollars in reparations from those responsible for the atrocities in Ukraine. To support the project, the claimants have launched a crowdfunding page. For more information visit crowdjustice.com/wagner.

This case and others within the broader civil society lawfare campaign will target the sanctioned and unsanctioned assets of any entity of Putin’s war machine, including those of mercenaries, sanctions busters, kleptocrats and the financial services that facilitate them. The campaign intends to commence a similar action imminently in the US courts. We are also actively exploring all potential routes of legal action and redress on behalf of all WG and Putin’s war machine victims around the world, and this case and the civil lawfare campaign will seek to achieve justice for all their crimes and wrongdoings, irrespective of where they occurred.

An international team of specialist practitioners have come together to bring this action and other cases in the campaign.

Investigators include:
Bellingcat, and an independent collective of researchers, investigators and citizen journalists specialising in fact-checking and open-source investigations.

We back and support this civil society lawfare team and their campaign. It brings great pleasure that from when we first met to discuss this campaign, it has now come to life through this first of hopefully many of its cases around the world. This is not just about trying every possible route to find fair reparations for our people who have suffered from the terrible crimes of Wagner and Putin’s illegal war, but also about our people fighting back through law and justice for accountability against criminals who have no respect for law or humanity. I want to commend all Ukrainians that participate in and support this case and campaign. We must deploy such lawfare on the battlefield against the criminal enemies of the Ukrainian people.

The UK can be proud of the military, financial and diplomatic support we are giving to Ukraine—and also of the efforts of British lawyers to prosecute Putin’s war criminals. We are sending a message to every part of his war machine—that they face the threat of sanctions and prosecution for the rest of their lives.

We are delighted to see the Ukrainian and international legal sectors working together to seek justice, accountability, and reparations for Ukrainians. We support the action and other planned cases in the civil society lawfare campaign. This is an important step for Ukrainians and one we should all support. It is of significant importance for distinguished courts around the world to provide access to justice for Ukrainians in their hour of need and for such courts to consider the injustices, illegality, and terrorism Ukraine has faced from Russia’s invasion.

We salute this action and thank the Ukrainians that join and support this case and their campaign, thereby playing a critical supportive role during this time of war. We face, daily, Wagner terrorism on the ground. We welcome that this action and the terrorism inflicted on Ukrainians will now be considered by a distinguished court and that ordinary Ukrainian victims are pursuing a just route to deserved reparations. Russia has used Wagner to terrorize the population by threatening and committing actions that are unacceptable and illegal under domestic law and the rules of international law such as the Geneva Convention. This action will show the world the truth of Putin and Wagner’s illegal actions and help to achieve justice for their victims.

I appreciate civil society efforts against PMC Wagner Group and its founder Y. Prigozhin in the High Court of London. I am convinced that we must unite the efforts of civil activists, and international and Ukrainian lawyers, synchronize the efforts of the state of Ukraine and all civilized countries of the world and hold PMCs Wagner and Prigozhin, Putin’s closest ally, accountable. They are responsible for war crimes against humanity, genocide, terror, murder and torture not only in Ukraine but also in Syria, Mali, Libya, CAR and other African countries. This time, we will not let them avoid responsibility for the death of more than a hundred thousand Ukrainians in the city of Mariupol, for torture and violence in Bucha, Irpin and other Ukrainian cities, for a chemical attack in Syria, a massacre in the village of Morua, and a troll factory, posing a threat to national security and stability around the world.

Yevgeny Prigozhin has made it clear that Wagner will be a significant factor in the future of Russia, so it's essential to address their criminal acts across the globe. This action is hopefully the first step to holding them and their backers to account.

A large international team of lawyers and investigators have worked together to develop this and other strong claims in courts around the world to provide a civil society response to Putin’s terror and illegal war. This is the first step in a broader civil society lawfare campaign that, with the help of ordinary people around the world through crowdfunding, will seek to demonstrate that justice will prevail, the guilty will pay for their crimes, and that the rule of law can strike a mighty blow against Putin’s war-machine. Wagner have terrorised the international scene for too long, in Syria, Mali, CAR and Libya. Putin’s deployment of their terrorism in Ukraine was just a further extension of his use of terrorism abroad in pursuit of his aggressive foreign policies. This action is about accountability and just reparations against Putin’s state-sponsored terrorism.

Ordinary professional soldiers do not target civilians, use rape as a weapon of war, torture captives and plant explosives around nuclear facilities, all to create fear and panic in a civilian population to cause them to flee their homes and their country. That Wagner, a criminal organisation, and its members wantonly committed such crimes in Ukraine demonstrates they are closer to terrorists than soldiers and more akin to ISIS than any legitimate armed forces.

This case is the first such attempt to prosecute persons involved in military aggression against Ukraine, in particular, in a foreign jurisdiction. Despite all the difficulties, including certain gaps in the legislation of Ukraine, we still understand that this is a huge step forward in strengthening the principles of justice and the inevitability of punishment. We welcome and support this action as a logical consequence of several months of joint work.

Prigozhin has brought war to American soil—first, he tried to alter the 2016 U.S. elections through a coordinated campaign of creating false social media accounts that spewed hate to divide the American public. Even after facing sanctions and a criminal indictment in the U.S., he hasn’t stopped. His private mercenaries, the Wagner Group, have committed terrorist acts and war crimes in Ukraine with the sole purpose of creating global disorder by impacting the availability of energy and food around the world, to include in the U.S. Americans are always ready to answer the call—whether on the battlefield or in the courtroom.

The process of rebuilding Ukraine goes hand-in-hand with holding Russia to account for its actions. This suit is just the beginning of the process, which will require holistic and novel approaches to litigation, arbitration and lawfare.

We are expecting a flood of enquiries from Ukrainian friends in the UK and overseas who wish to join this case or others in the campaign. This process will take time at the beginning with the resources we have—we thank you for your patience—but Justice Register will work tirelessly to ensure that your access to justice is as fast and as simple as is possible.

For further information and all media enquiries please contact enquiries@mccue-law.com or contact@highgate.ltd.

Victims ask that any reporting includes the link to the crowdfunding page crowdjustice.com/wagner.